Several items unearthed in the House are now preserved on the Rimini Archaeological Museum : kitchen vases and other tableware, about 80 coins but in particular 150 surgical instruments.

The tools of the trade 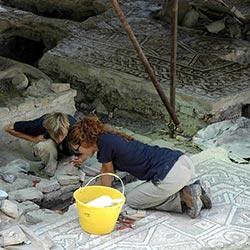 The collection of surgical instruments unearthed in the Surgeon's House is exceptional: 150 items, the largest array in the world for number and typology.
There were no gynaecological instruments, mainly instruments to be used for bone traumas and wounds showing therefore his military professional experience. This collection includes also a extremely rare iron for extracting arrow heads from bodies, called "Diocle's spoon". It has a long iron handle with a sharp spoon-shaped tip, with a hole used for arrow-head extractions. 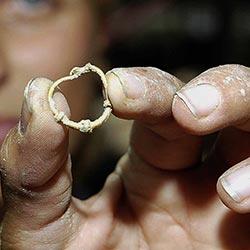 During the excavations, a few containers for the preparation and preservation of medicines were unearthed in the room of Orpheus.
Their function is clearly proved by the Greek words inscribed on the vases. Another unusual find is a thermos-type vase, in the form of a foot for for special therapy..
Furthermore we have to add to the list of items discovered: kitchen and tableware and about 80 coins, left on the floors, probably during the violent fire. The presence of the coins is particularly impostant because it allowed to us to determine the date of the fire when the house was abandoned: around 260 A.D. 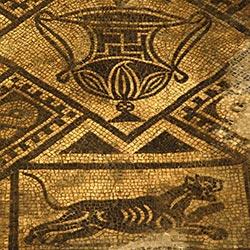 Particular evidence of the quality of decoration is provided by a decorative feature originally situated in the Triclinium (dining room) of the House. It is a sophisticated glass paste panel imported from the east and showing three brightly coloured fish in a blue sea. This was probably situated on a marble shelf and reflected the Adriatic sea, just a few steps way.
From the rubble, parts of coffer ceilings and walls, polychrome frescoes with floral and animal motif decorated fragments were unearthed, in particular a view of the harbour.
In the garden a large marble basin and the foot of a statue of the Epicurean philosopher Hermarchus were unearthed. All that suggests the adherence to Epicurean philosophical ideals of Eutyches as well as his Greek origin.