The Surgeon's House was built during the second half of the second century A.D. and situtated in the northern part of the city directly on the seafront, which, at that time was more than one km further inland than nowadays.

The structure of the House 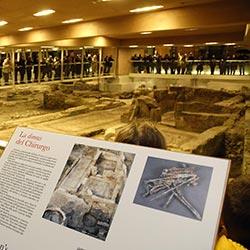 The House was a two-storey residential building with baked clay walls, standing on stone bases. There was a small entrance which led into a service area by an inner corridor. On one side there was a garden and on the other side several rooms.
The House had a dining room (triclinium), a bedroom (cubiculum) and two living rooms. One of these was the “taberna medica” where Eutyches, the surgeon, looked after and operated on his patients and sometimes hospitalized them. In this room a fine mosaic with Orpheus surrounded by animals was unearthed. On a fragment of the wall of the Cubiculum, the archaeologists found the inscription “Eutyches homo bonus”, scratched on the wall probably by a patient hospitalized in the House. This has allowed us to trace back the name of the owner of the House.

There were also other service rooms such as a heated area (hypocaust),a latrine and on the upper floor a kitchen with pantry.

Fittings and decorations on the House testify the oriental taste of the owner, a very refined person, a highly cultured man and also extremely wealthy. That is why the mosaic flooring of the House also has the same inclination to beauty.
There is a selection of polychrome mosaics and another with a white and black geometric pattern. All mosaics are well preserved, in particular, the fine mosaic of Orpheus: coloured and finely decorated with Orpheus as the central figure, surrounded by animals in the woods, as frequently depicted in the classic representation.
According to the legend, Orpheus was the son of Apollo and Calliope and he was able to charm the animals by the melody of his song. The adjacent room, smaller, is decorated with black and white mosaics.

After the second half of the 3rd century , during the reign of the Emperor Gallienus, raids of Germanic tribes ravaged the town of Ariminum (ancient name of Rimini) and the House was destroyed by the fire. The sudden collapse of the walls managed to preserve quite well fittings, furnishings and mosaics.